I am an educator and internationalist. I have taught – and written– in the UK, Nigeria, Pakistan and South Korea. I have been Chief Executive of the Council for Education in World Citizenship, the Pestalozzi International Village and Jubilee Debt Campaign. I have been a
trustee of Chatham House (Royal Institute of International Affairs), the UNA-UK and the British Humanist Association (now Humanists UK). I have worked in mathematics education, including with the Open University and for the National Centre for Excellence in the Teaching of Mathematics.

I am chair of the Region’s Policy Committee, and of Streatham & Clapham Branch. Outside UNA, I work in the field of Responsible/Ethical Investment. I have a University degree in Mathematics and an MBA. I believe UNA is an important means:  for people to show their support for the UN’s principles; for educating people about the UN’s work; for campaigning to strengthen it; and for ensuring that our own government acts in line with international law, advances shared global goals and plays a constructive role as a UN member state and permanent member of the Security Council.

I have chaired Tunbridge Wells (latterly Tunbridge Wells & Wealden) UNA branch for over thirty years. I am a Chartered Librarian. I have always worked full-time, firstly as a children’s librarian, then as a student administrator for the SE Region of the Open University, where I gained my degree. I was a governor of a designated primary school for fifteen years. I became site librarian at an H & FE college, and in my last job I ran two hospital libraries and a patients’ library service for MTW NHS Trust. After retiring I joined the UNA-LASER Committee in 2014, and in January 2021 I became Secretary.

I am currently a Research and Policy Assistant at international peacebuilding charity, Conciliation Resources. I have been actively involved in UNA activities since 2016 and was elected Chair of the UNA Canterbury branch in January 2021. In 2019, I, alongside several other university students, set up the inaugural UNA Youth Platform in order to give a stronger voice to young people across the UNA umbrella. I currently act as an advisor, providing support on campaigns, fundraising and operational processes. Through my work at UNA Canterbury, I have played a key role in the organisation of two editions of the flagship event, the Service for Peace with the most recent one held in October 2021 – managing relations with Canterbury Cathedral, publicity and logistics. I hold a BA in Politics and International Relations, as well as an MA in International Law obtained from the University of Kent. I am particularly interested in causes such as gender, youth empowerment, climate change and peacebuilding. Outside of my busy working life, I am an avid traveller (when possible) and have had the opportunity to visit over 30 countries across Europe, Africa and Asia.

A Marine Biologist and Oceanographer, I have been part of Scientific research teams in the South Pacific (UNDP Programme) (early 1990s). I led international teams regarding coastal Community Projects in Latin America and the Caribbean (1992 – 2001). I have also been a member of eight International Human Development Forums across the world. I have numerous academic qualifications from Chile, Cambridge and London. Between 2005 and 2007 I was a Lecturer in Bioethics at Universidad del Mar, Chile. A member of Bexhill & Hastings UNA, I am currently chair of UNA Climate and Oceans, bringing together many regional NGOs, universities and government agencies to do research and raise awareness. I have been a speaker at numerous UNA branches in England – and Sweden. I am also a Committee member of UNA London and South East Region.

I am a qualified advocate in England and Wales; and India who has practiced as a lawyer at the High Court in Calcutta. I am an accredited member and leader at the United Nations. I am an advocate for UN75 and UNICEF, as well as an accredited member of UNEP, and ECOSOC. I am UN TeachSDGs Ambassador, Global Goodwill Ambassador (GGA) for Europe/UK. I did social media for the LASER UN75 Festival, Building a more secure world. 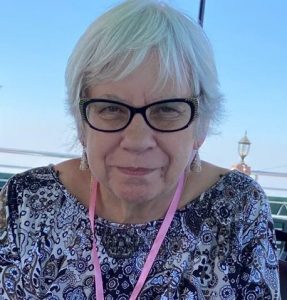 I retired in 2018 after nearly 20 years as a Diplomat working in Sub-Saharan Africa and on Middle East including Iraq and Jordan and South Asia issues and more recently, in Brussels in collaboration with the EU. Throughout my Foreign Office career,I specialised in political and security policies in conflict affected and fragile counties, focussing on conflict resolution, peace building, governance, rule of law and building stability post conflict; and I represented the UK in various multi-lateral platforms. I was the Strategy Manager for conflict in the MENA region for the first two and a half years of the Arab uprisings. My most recent role was as Senior Policy Officer for Women, Peace and Security and I was one of the authors of the National Action Plan for UNSCR1325 and was the Foreign Office lead on safeguarding policies in international contexts. I was awarded the OBE for services to diplomacy in Sub-Saharan Africa, and the Cross of St Augustine by the Archbishop of Canterbury for inter-faith work and support for the church’s role in civil society in Sub-Saharan Africa.

I am a physics and electronics graduate and have been involved in design, development and safety/security assurance of complex technologies since 1990s. I am a UK representative in the European and International standards and have been the chair of the world’s first ethics in technology standard, IEEE7000 published September 2021. I was appointed as the Vice Chair of Ethics Certification Programme at IEEE, the largest global non-profit professional institution founded in the US and currently lead the programme for global roll-out to public and private enterprises. I have been a member of UNA for 15 years and also at Enfield and Barnets branch where I currently act as the co-chair.

I spent many years at Railtrack, the privatised UK railway as the risk assessment manager, evaluating and finding pragmatic risk based solutions to the infrastructure and critical projects across the UK. I have also been involved in international consultancy on matters of safety, security and lately ethical assurance of products, systems and projects. I can bring a blend of extensive global experience, deeper systematic understanding and assessment of risks, opportunities and ethical dimensions of various projects and initiatives to the LASER committee.

I have experience working with the UN in Human Rights and Humanitarian Affairs and Post Conflict Reconstruction, especially in North Africa and the Mediterranean. I have worked for the EU in counter-terrorism and counter-Organised Crime in the Sahel, covering Trafficking and Slavery. I am an Executive Committee member of the Westminster United Nations Association.

I am a legal Advisor, International Relations Officer, A Visionary and A Strategic influencer with workable solutions. I love cooking, world politics, singing and dancing. Discoveries in my legal advisory work led me to complete a stint of politics from Oxford University and I recently completed PhD in law and legal studies. I have been actively involved in UNA-UK activities since 2017 and I did social media for the LASER UN75 Festival on Economy Security.

I am a musician and have always had an interest in development issues. I studied for a degree in development at Birkbeck University. I am vice-chair of UNA Wandsworth and a long-standing committee member of UNA Westminster. Currently I am chair of UNA LASER Trust and was chair of LASER from 2015-19. I have been on the executive committee of WILPF and have a particular interest in the welfare of women. Over the years I have helped deliver some very large projects for UNA, WILPF and Voices of African Women.

As an IT and cybersecurity consultant, I have been working in the financial services sector in the UK and world-wide for the last 30 years. With a degree in Astronomy from UCL and a Masters in Geophysics from Newcastle, my previous career for 15 years was that of a geophysicist working for oil companies in the UK and the Middle East. Born in Bangladesh, I have made England my home. A humanitarian and cosmopolitan at heart, I am interested in understanding and solving how human society can live and thrive sustainably and overcome the negative effects of our age, including climate change, inequality, unregulated technology and social, political and economic barriers. I am Chairman of UNA Harpenden.

A member of Westminster branch, I have been representing the LASER committee on a working group on an International Court for the Environment for the last few years, I am also a member of the Academic Council for the UN system (ACUNS). After an inspirational experience working for UN University in Tokyo and at the UN Secretariat in New York in 1997 on peace, development and UN reform, I became active in UNA-USA, New Zealand and Australia. From 2007-2010 I was President of UNA-NZ and attended the triannual WFUNA Plenary, and the UN DPI/NGO conference in Paris on 60th anniversary of UDHR. For UNA-NZ I worked with UN and Government Agencies and NGOs on a number of issues, including International Development, and Disaster Relief.

I am a long-time member of the L&SER committee and have chaired Westminster UNA since 2001. Over the years, we have initiated and sustained a film festival, an international law lecture, and a conference and wreath-laying ceremony to mark International UN Peacekeepers Day. In 2021, the government agreed to our proposal for the naming of United Nations Green, here in the heart of London.