UN Agencies are facing a major funding crisis after donors, including the UK, Saudi Arabia and the UAE have cut their pledges by 50%. The UN’s humanitarian chief, Mark Lowcock, said unless more money was raised Yemen “will face a horrific outcome at the end of the year”

Save the Children has been forced to cut services for children suffering from severe acute malnutrition to just 20% of its normal levels as funding dies up3.

Severe acute malnutrition, the most extrem 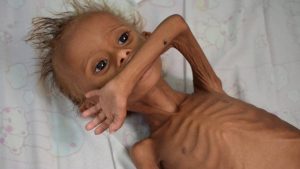 27,500 children every month are missing out on the vita 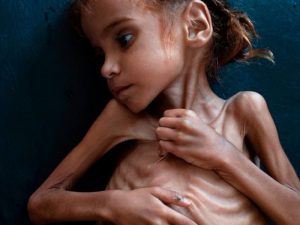 l treatment they need to keep them alive.

The child on the right was 7 years old when she died.

The World Food Program has cut rations in half. The number of people the UN agencies can feed has dropped from 13 million to eight million.

The Saudis recently declared a 2-week unilateral ceasefire, which they extended by a further 4 weeks. Unfortunately, the Houthis rejected this, fired missiles into Saudi Arabia, continued their advance towards the oil rich city of Marib and the laying of landmines.

Now the UK is resuming arms sales to the Saudis, the bombing of civilian areas has resumed, and fighting by all sides has intensified.

Stability is threatened as British public misunderstand the Arab world

Asking Foreign Secretary urgently to save lives in Yemen

This site uses Akismet to reduce spam. Learn how your comment data is processed.